The roundup this month comes from HMP Garth where a little while back the group reported on Belinda Bauer’s Exit.

Meet Felix Pink. The most unlikely murderer you’ll ever have the good fortune to spend time with. Felix is 75 years old and an Exiteer who helps those with terminal illness to die when they choose. When Felix lets himself in to Number 3 Black Lane, he’s there to perform an act of charity: to keep a dying man company as he takes his final breath . . . But just fifteen minutes later Felix is on the run from the police – after making the biggest mistake of his life.

Now his world is turned upside down as he must find out if he’s really to blame, or if something much more sinister is at play. All while staying one shaky step ahead of the law.

Exit is a quirky read, full of twists and turns. Lee Child described it as ‘charming, intensely human, important…and very suspenseful. I loved it.’ The Garth group mostly agreed and praised both characters and plot:

‘it’s not a fast-paced thriller but the suspense is high and there is a lot of humour and wit;

‘Felix is an excellent character who just wants to do the right thing but is still trying to face up to his painful past – I really felt for him’.

There was some high praise for its comic charm.

‘It had the feeling of old-style British Ealing comedy about it’.

‘A delightful piece of codswallop from beginning to end’.

Exit is very different from Bauer’s earlier work. Her first novel, Blacklands, is a tense thriller about a boy who enters into a dangerous correspondence with an imprisoned serial killer. Her 2018 book Snap was nominated for the Booker Prize, one of the first crime genre books ever to be shortlisted. It opens with three children sitting in a sweltering car on the side of a motorway waiting for their mother to return with help for their broken-down car. Before she leaves, the mother says to 11-year old Jack, ‘You’re in charge.’ When she doesn’t return, Jack picks up the baby, Merry, and guides his little sister Joy along the hard shoulder. Nobody stops. When they finally reach the emergency phone, it is dangling off the hook. Three years later Jack is still in charge, trying to keep his sisters alive and hidden from the authorities in a terrible house.

In an interview with Alison Flood for the Guardian, Bauer said:

‘When I first started I was really frustrated [about being pigeonholed as a crime writer]. I wanted to do so many other things, I wanted to tell so many other stories, and then slowly it was revealed to me that I can tell any story I want in the crime genre. Now I have so many ideas for books where obviously there is a crime in them but that is not the point of the story…For me a book is always about the emotional journey. The plot is completely irrelevant as long as you can take people on that journey with you, say to them: “You know what? Terrible things are going to happen but if you trust me you’ll be emotionally satisfied.”’ 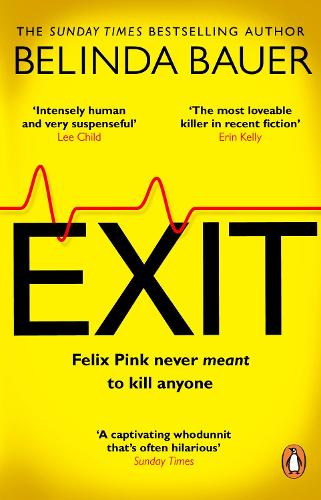