A regular column to help you find a good read, even if you can’t get to the library yet. Read the original version in Inside Time here.

‘The way we should take life is to ensure that if a biography is ever written about us, it’s a bloody good read’

This month we’re browsing the shelves for good stories about real people. The great thing about biographies and memoirs is that libraries are full of them and there are so many different kinds – from Barack Obama’s inspirational Dreams from My Father to Mr Nice, Howard Marks’ astonishing story of a drug-dealing career and 43 aliases.

Below are just some of the categories you could ask for, along with a few authors and titles for each one.

Billy Connolly: Tall Tales and Wee Stories and lots of others

Romesh Ranganathan Straight Outta Crawley and As Good as It Gets: Life Lessons from a Reluctant Adult

Spike Milligan: seven books of memoir, including Adolf Hitler: My Part in His Downfall

Born a Crime, Stories from a South African Childhood: Trevor Noah’s fierce and funny account of growing up as a mixed-race child during the twilight of apartheid

Educated: Tara Westover’s story of growing up in a survivalist Mormon family and her fight for education and escape

A Life Like Other People’s: Alan Bennett’s brilliant account of his family, by turns hilarious and heart-breaking

Bageye at the Wheel, A 1970s Childhood in Suburbia: Colin Grant’s memoir of growing up as a child of the Windrush generation

The Louder I Will Sing, A Story of Racism, Riots and Redemption: Lee Lawrence’s memoir tells the story of the police shooting of his mother when he was eleven and his determination to bring it to light

In Order to Live:  Yeonmi Park’s horrifying account of her childhood in North Korea and her struggle to escape

My Name is Why: Lemn Sissay’s searing story of his childhood in the care system and his eventual triumph over it

I Know Why the Caged Bird Sings: Maya Angelou’s memoir of her black girlhood in the racist American South of the 1930s

Barack Obama: Dreams from My Father, A Promised Land

The Autobiography of Malcom X

The Sun Does Shine: Anthony Ray Hinton’s story of 29 years on Death Row for a crime he didn’t commit, how he not only survived but triumphed over it

Orange is the New Black: Piper Kerman’s account of her time in a US women’s prison which became a bigtime Netflix hit

In the Belly of the Beast: Jack Henry Abbott’s letters to writer Norman Mailer about his life in a US maximum security prison

A Sense of Freedom: Jimmy Boyle’s experience of growing up in the gangland violence of Gorbals, his imprisonment for murder and a rehabilitation programme that saved him

If this is a Man: Primo Levi’s haunting account of his survival in Auschwitz and what it cost him

Amy Winehouse: subject of several biographies, including ones by both her father and her mother

Ben Macintyre is the king of spy biographers. His books include The Spy and the Traitor, Agent Zigzag, Double Cross and Agent Sonya

Prisoners of Honour: David Levering Lewis tells the story of Alfred Dreyfus, a Jewish army officer falsely convicted for spying against France in the 1890s and sent to the notorious Devil’s Island prison off the coast of French Guiana in South America

Wild: Cheryl Strayed’s lone walk across eleven hundred miles of the west coast of America in search of herself

Into the Wild: Jon Krakauer’s account of the pull of the American wilderness and what it cost one young man 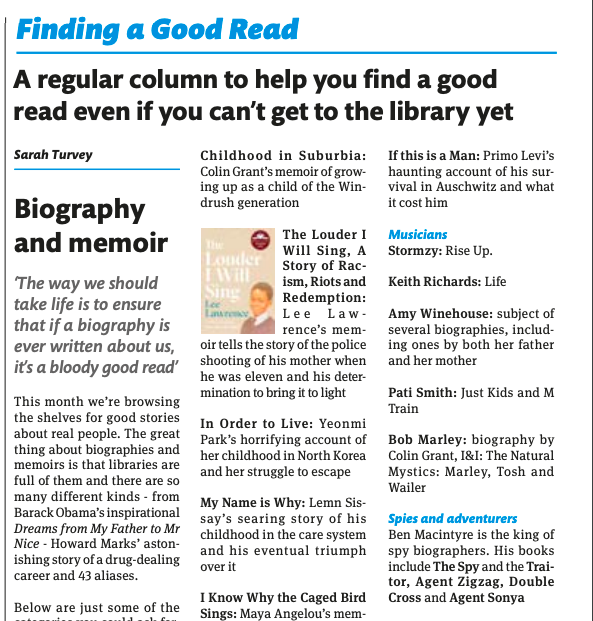