The blurb was a great hook:

‘An unnamed defendant stands accused of murder. Just before the Closing Speeches, the young man sacks his lawyer and decides to conduct his own defence.

He tells us that his barrister told him to leave some things out. But he thinks if he’s going to go down for life, he might as well go down telling the truth.

There are eight pieces of evidence against him. As he talks us through them one by one, his life is in our hands. We, the readers – members of the jury – must keep an open mind til we hear the end of his story. His defence raises many questions…but at the end of the speeches, only one matters: Did he do it?’

You Don’t Know Me was a World Book Night choice in 2018 and several PRG groups took it on, including Bullingdon and more recently High Down. The author Imran Mahmood is a criminal barrister with 25 years of court experience and though very different from the young man in the novel, Mahmood is a far cry from the cliché of the public school barrister. He was born to first-generation immigrants from Pakistan and went to a comprehensive school in Liverpool before university and the bar.

The meetings in both prisons were lively and energised from the off and everyone had views. Not surprisingly there was spirited criticism of judges, juries and QCs (prosecution and defence) and at Bullingdon a couple of the men got a bit heated. But others stepped in to bring things back to the book and keep the discussion on track.

Everyone was intrigued by the narrator taking over from his QC and most found his voice authentic. ‘You believe he’s from a tough South London estate and he knows all about the power of the gangs’. In both groups there were members from very different backgrounds who commented on how the book had opened their eyes to the experience of many of their fellow prisoners.

Most of the men believed the narrator’s story til some wild developments close to the end. So is the narrator a liar or did the author get carried away with the plot he invented?  Or as one member suggested:

The volunteer at High Down introduced a real life case involving complex issues of family relationships and competing claims. The group debated the rights and wrongs and came up with a collective decision before opening an envelope containing the judgement given. There was close alignment between the two which made one chap remark ruefully, ‘If only the judge had listened to me in my own case’.

All in all a great discussion that showed just what books can do: open up an unfamiliar world or connect with your own experience but also make you think critically about it. Many thanks to World Book Night and to Penguin Books who publish the novel.

An earlier version of this piece first appeared in Inside Time. 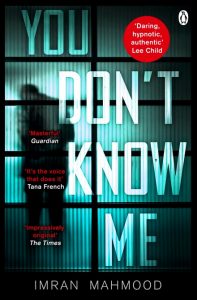 There was lots of discussion of truth and lies and the ways they are spun into good or bad evidence. ‘The author’s right, when you walk into that court you’d better have a story and it better be good’.