Featured in Inside Time in September 2019

Every year, the Cityread project (slogan: One City, One Book, One Month) promotes a novel to be read by groups and individuals through-out London. This year, two PRG groups – at HMPs Send and Downview – were delighted to be included in the scheme: to be sent multiple copies of the book and to have a visit from Ayisha Malik, author of Sofia Khan is Not Obliged, a romantic comedy which has been called ‘a sort of Muslim Bridget Jones’.

Both visits were terrific, lively events, partly because the novel itself is very enjoyable… ‘I don’t really remember putting it down’ was an early comment, and everyone was enthusiastic, with favourite bits they wanted to discuss. At Send, one woman said, ‘we could hear people laughing down the corridor while they were reading it.’ Everyone appreciated how Ayisha used humour to engage with serious topics, and to present the dilemmas of a young hijab-wearing Muslim woman working – and looking for love – in 21st-century London. When someone hisses ‘terrorist’ at her on the Tube, she retaliates by shouting back, ‘terrorists don’t wear vintage Manolos!’

Alicia at Downview summed up what a lot of women in both groups felt after reading the novel – that she had ‘learned a lot about the Muslim faith, and particularly Muslim women’. ‘I had no concept of the ins and outs of Muslim life’, said another. One particular ‘in and out’ which struck a lot of us was the ‘hole in the wall’ marriage, where a bride could find herself living in a semi-detached way with her in-laws, separated only by an interconnecting door.

Ayisha was approachable, open, and clearly pleased to be sharing her work with the groups. At Send, Catherine arrived late, rushed in and hugged Ayisha; ‘I think she liked it’ was Ayisha’s response. ‘The most welcoming hug I’ve ever had!’ She was brilliant, even when the first comment from the Downview group was a strongly-voiced opinion that the first 50 pages were a bit of a struggle: ‘I’ll bear that in mind for my next book!’

A word several women used about both Ayisha and the book was that they were ‘relatable’, which sums it up, and speaks to how effortlessly she connected with both groups.

Ayisha was very encouraging to aspiring writers among the women, and talked about her early unpublished work, and how fortunate she felt to have had such success with Sofia Khan, her first novel. She has since published The Other Half of Happiness, which sees Sofia married, and her third novel This Green and Pleasant Land came out in June of this year. She urged the women to keep at it, and was adamant that you have to be a good reader to be a good writer. She recommended her current favourites – Sarah Waters and Ottessa Moshfegh – and also explained how she loved
classics like Jane Austen and the Brontes: a lot of the same social framework exists in the Asian community, with religion interwoven into daily life, whether Muslim or Christian, creating constraints and familial duty for Sofia Khan as well as for Elizabeth Bennett – this produced a fascinating discussion.

Women in both groups found the book insightful and inspiring, and Ayisha herself even more so. I can’t remember a more successful author visit – the buzz is still with us. Huge thanks to Ayisha, her publisher Zaffre, and to Cityread. 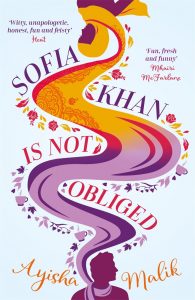