Read the original Reading Group Roundup in Inside Time here.

PRG produces a weekly handout called Bookstuff with short stories, poems, brain teasers and quizzes. If you haven’t seen it, do ask around. And to whet your appetite, here’s a sample of what you’ll get.

Fairness and Equality: what do they mean?

John and Margaret went shopping to buy Christmas presents for their three sons: Matthew 14, Mark 12 and Luke 10. The loving parents always tried to treat their children equally. This year they had budgeted to spend £100 on each of them.
For once it looked as if their shopping would be trouble-free, for they soon found what they were looking for: handheld PlayBoy games consoles at £100 each. Just as they were about to take three to the checkout, John noticed a special offer. If you bought two of the new, top of the range PlayBoyPlusMax consuls at £150 each, you would get an original PlayBoy free.
They could spend the same amount of money and get superior goods.
‘We can’t do that,’ said Margaret. ‘That would be unfair, since one of the boys would be getting less than the others.’ ‘But Margaret,’ said John,
excited at the thought of borrowing his sons’ new toys, ‘How can it be unfair? This way, none of them gets a worse gift than he would have done, and two of them do better. But if we don’t take the offer, then two of the kids are worse off than they would otherwise be.’

‘I want them all to be equal,’ replied Margaret. ‘Even if it means making them worse off?’
(Source, Julian Baggini, The Pig that Wants to be Eaten and 99 Other Thought Experiments)

Teasers
• Is something boring because of it or because of you?
• If all religions were banned, would there be more or less war in the world?
• Can dogs have a sense of humour?
• If scientists could create a new species of animal purely for testing medicines on, should they do it?
• IS MARMITE NICE – YES OR NO?

Westron wynde, when wilt thou blow,
The smalle raine downe can raine?
Christ if my love were in my armes,
And I in my bedde againe.
Anonymous, early 1500s

So fair art thou, my bonnie lass,
So deep in luve am I;
And I will luve thee still, my dear,
Till a’ the seas gang dry.

Till a’ the seas gang dry, my dear,
And the rocks melt wi’ the sun;
I will love thee still, my dear,
While the sands o’ life shall run.

Giving Up Smoking
There’s not a Shakespeare sonnet
Or a Beethoven quartet
That’s easier to like than you
Or harder to forget.
You think that sounds extravagant?
I haven’t finished yet —
I like you more than I would like
To have a cigarette.
Wendy Cope (b. 1945) 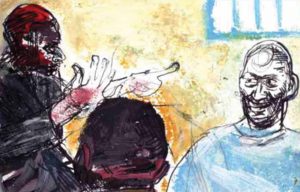