A report from one of our reading groups.

“We had chosen 2 books to tide us over the long Christmas break. We discussed Grapes of Wrath first and it generated such a lively discussion that we ran out of time and had to have a much briefer discussion of Never Let Me Go.

Comments from the group:

“I read this book as a teenager. Enjoyed the film but wouldn’t say this was a great book.”

“I got a mixed message about the family. The family are not portrayed as very bright – they believed the leaflets and didn’t seem to learn from their mistakes. People are still mislead by unrealistic dreams.”

“Steinbeck handled the dialects very well. Kept the flow going. But, it was socialist doctrine dressed-up as a novel.”

“Interesting that Ma made all the important decisions.”

“Dog eat dog world. Settlers stole the land from Native Americans, then the bank stole the land off them. The cycle of life. They were indignant about what happened to them but couldn’t see the parallels with what their forebears had done to the Indians. Joad’s perspective was that they had been hard-done-by, but it wasn’t personal, it was just the wheel of life.”

Thank you very much to the group at HMP Standford Hill for this excellent report. And thanks to Penguin Random House for supplying these books. 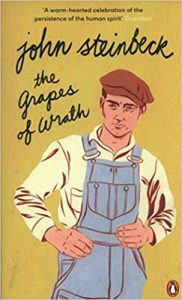